Fluffy invited for the official opening of Fluffy Library on the 12th of October, two lovely girls to play music. The first one was S O a N N E F a I R, an illusion trapped in a pink time mesh, and the second is Papithedog tv, a dog-artist based in Athens. GRLZ Live Acts was an evening of cuddles, music and girl power.
About the Artists:

Eggs and Legs is a post-apocalyptic drag trio, which dives into spirituality, religion, heroism, sadism, nonsense and researches questions like: What it means to be a woman? Why does the good heart has limits? They often offer gifts to their fans, such as performative evenings, diy complexities and short films that travel all over the world.

Fluffy and Antigoni Tsagkaropoulou invited Fenia Kotsopoulou and Daz Disley to keep each other company inside Fluffy Library for 7 days and to discover various secret aspects of Fluffy itself.

What could you find out if you sleep in Fluffy and cuddle with the pink little horse for 7 days? What secrets will Fluffy share with you and what kind of stories pop-up from the library and become reality during the night? And when you ask for bedtime stories, will you hear the voice of Fluffy itself·before you fall asleep?

POP Tektonism’s fairy tale Vulnerable Monsters is the story of the white little thingy who is transformed into a Cockatoo parrot. The story explores sexuality, disability and the monster identity, through Tektonism’s personal experiences as a pansexual albino. Vulnerable Monsters will be told in four chapters, illustrated with drawings and songs inspired by friendship and radical tenderness, all performed atop Fluffy.

On Saturday the 20th April 2019, Fluffy invited bitchy 101, millennials’ most popular pop-punk band (that is also a ghost band with no music online), for a closing event, an ode to all the friendships that were built up throughout the year.

Bitchy 101 is the favourite pop punk ghost-band of the queer millennials, singing songs about angst, sexual frustration, undelivered expectations, psychosomatics and about poor data proletarians in our confusing days.

On April 2019, the Political Fatties shot their film “We Are The Real Cyborgs” inside Fluffy Library”.

The Political Fatties are a group of queer fat femininities discussing the aspects of fatness as a political identity,, through art, activism and research. Their practice includes polemic performances, tender workshops for fats and dominate talks for thins, video and poetry based on feelings and/or academic resources. The group has realised a number of events exploring the main themes of their work and the audience perception of them, published a zine with four texts describing the political aspects of fatness, in collaboration with the Athenian publishing initiative Queer Ink, and in 2018 organised a symposium titled FATTIES: THE POLITICS OF VOLUME, supported by the University of Amsterdam. 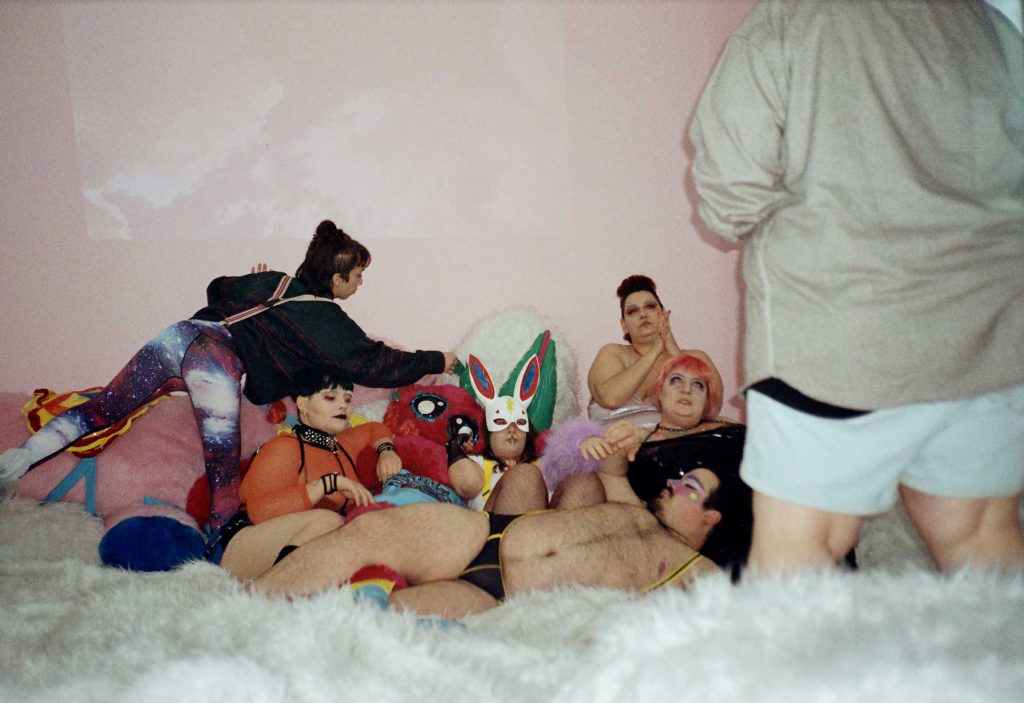